Throne of the Crescent Moon

It is something that I think has been missing for quite some time, but Saladin Ahmed has taken a firm grasp of it. A fantasy based upon the Arabian folktales. 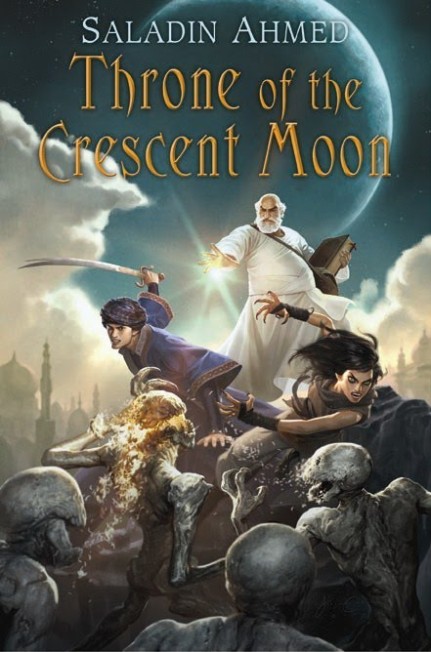 I have never read any book based upon the mythology of the Arabian folktales or Thousand and One Nights. Not that I ever missed it, but now I think why hasn’t anybody done it before. Saladin Ahmed has taken the myths and tales from the Arabian area and he tells an interesting story set in the same climate and culture.

Adoulla Makhslood is an aging Ghul hunter, who has grown tired of hunting and having adventures. He and his assistent Raseed bas Raseed, a Dervish fighter, work out of the city of Dhamsawaat. As events involving Ghuls increase, Adoulla believes that a dark sorcerer must be behind the events.

The book explores the rich world of Arabian tales and myths with Djinns, sorcerers and Ghuls, but it is also Saladin’s ability to make you see the world in front of you through his writing that really grabs you. The similarities to our world is uncanny and I really love how he describes the different characters’ relationship with their god or gods. He has built an incredibly complicated world and I definitely will visit the Crescent Moon Kingdoms again. I also recommend others to take a trip into Saladin Ahmed’s wonderful world.