Mazarkis Williams’ debut novel mixes deep rooted conspiracies and magic. And who does not love that? 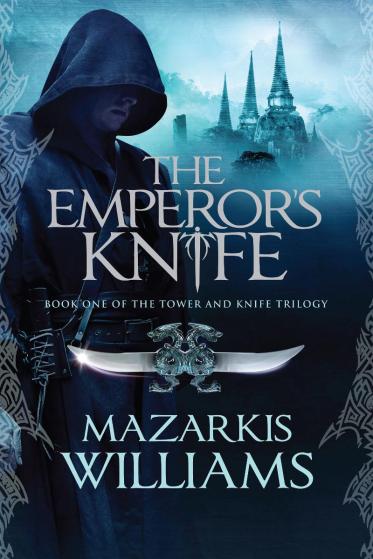 The Emperor’s Knife is set in the Cerani Empire, which sort of gives me a feeling of being inspired by the ancient Persian Empire. The description of clothes, the diversity of people and the area it is set, are areas that are not used enough.

The book revolves around three people; Eyul, the ageing imperial assassin, Sarmin, the imperial prince and Mesema, a windreader and the daughter of a chieftain of the northern plains. The Cerani Empire is under threat by the enigmatic Pattern Master, who seem to control people through a pattern that appears on people’s skin. Sarmin is under lock and key, mostly because his brother spared him when he took over the throne and he has visions, which people interpret as his mind losing its grip on reality. Mesema is on her way from the northern plain to marry Sarmin as his brother, Emperor Beyon, cannot produce an heir. Eyul is charged to uncover who the Pattern Master might be and he seeks out the Hermit. As they move deeper into the conspiracies, the more they feel like they cannot trust anyone.

I feel like the book very well written and Mazarkis had me enthralled from the first chapters. It is the first book in a trilogy, so I really look forward to read the second book Knife Sworn, which I have just bought at my local fantasy shop. So The Emperor’s Knife gets the Benign Seal of Approval.