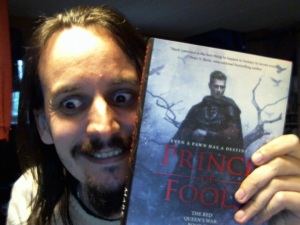 This is the first book in his new series The Red Queen’s War, another trilogy placed in the same post-apocalyptic world he placed The Broken Empire. If you have not read The Broken Empire, fret not. This book can be read as the first part of a stand-alone book and it is placed around the same period as the books in Broken Empire, so you could in fact read both Prince of Fools and Prince of Thorns at the same time and get a deeper view of Lawrence’s massive world.

In this book we follow another Prince, Jalan Kendeth, the grandson of the Red Queen. He is the typical aristocratic prince in the fact he does not mind going through his life drinking and bedding beautiful maidens. Well, they’re not maidens for long. He is also viewed as a hero by his people as he accidentally won them the final battle in the last war. This is very much the opposite of his character, as he would rather run away from trouble than into it.

After he meets the Norse warrior called Snorri and he escapes a trap set by the Silent Sister, he and the warrior discovers that they are connected and their journey to discover the reason for their connection begins.

Prince of Fools is a deeper delve into Lawrence’s world and I love how he drags me in and makes me sympathize with people who are not classic hero types. It was very fun to see the rise of Jorg Ancrath from another viewpoint and get to know Jalan. It is a book I highly recommend and I think this series might be greater than his last.

I'm a writer of sci-fi and fantasy. I write screenplays, novels and short stories. I also work as a writing consultant for upcoming writers. My specialty is mythology, world building and psychology.