I have long yearned for a book that properly portrays the Norse culture and it is kind of funny that it comes in the form of a fantasy book. 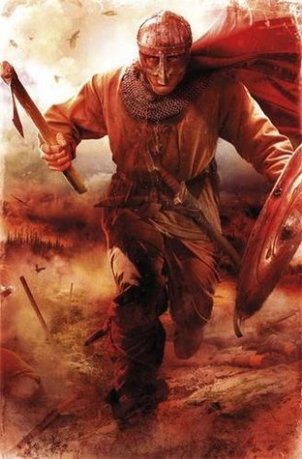 The Crimson Shield is placed in a world dominated by three cultures, the Marroc, the Lhosir and the Vathan. The Lhosir is a warrior culture that clearly has taken most of its traditions from the Norse warrior culture in our history. The Marroc are more agricultural and can be compared the English or more central European cultures. The Vathan are a culture that draws its inspiration from the horse tribes on the Arabic peninsula or the Mongol steps. It is a rich and interesting premise and the clash between the cultures comes to the surface in several situations.

Gallow is at the center of this clash of cultures. He is a Lhosir who has lived among the Marroc for several years. He has taken a wife, fathered three children and he no longer wears the traditional Lhosir beard, which gives the Lhosir their name forkbeards. He is on the other hand not trusted by all the Marroc. When the Vathen threated the Marroc, he goes to join his countrymen to defend the land. There he saves the life of the Lhosir hero, Screambreaker. As Gallow has been living among the Marroc and shaved his beard, he isn’t considered a Lhosir, so he is caught between two cultures. He has no choice, but to return to his old ways of war.

This book was just something I picked up at Outland in Oslo by chance. I had not heard of Nathan Hawke or the book, but I fell in love with the cover. It was something that screamed Norse warriors on the front and I bought it. During my time reading it I was drawn deep into Gallow’s world and I really fell in love with several of the characters. The traditional warrior archetypes in Screambreaker and Tolvis, gives me a clear link to the Icelandic sagas and their heroes. They are not perfect people, but they try to live up to their own standards. The more duplicitous characters like Medrin Twelvefingers, are a great way of showing a shift in the culture.

This book really gives me a sense that the author must have read Njål’s Saga or others of the like, so if you like Norse Culture, you will enjoy a couple of days in the imagination of Nathan Hawke.